The History of Scammell Lorries Limited

The Scammell heritage began in the Victorian era, when the wheelwright, George Scammell of Fashion Street, Spitalfields, in the East End of London, developed his business. Later named G Scammell and Nephew, they were involved in the building and repair of craftsman-built carts and vans.  In the early 1900s a substantial business had been built up selling and maintaining Foden Steam Wagons and small trucks.

One of the firm’s customers, the haulier Edward Rudd, had imported a ‘Knox Tractor’ from America and was so impressed with its high payload/low weight potential that it is believed he suggested to Scammell and Nephew that they build a similar vehicle for the UK.

The outbreak of war in 1914 presented itself as a turning point in the history of road transport. Mechanical transport was seen to work, proving its vast potential beyond doubt to such a forward-looking company as Scammell.

So when George’s great nephew, Lt Col Alfred George Scammell, was injured and invalided out of the army he was able to apply the practical experience gained during the war and set about developing the ‘Articulated Six-wheeler’ which went into production in 1920.

This vehicle, like the Knox, was articulated and its very low axle weight allowed it to carry its 7½ ton payload at 12 mph rather than being limited to 5 mph. Hence, Scammell’s first lorry advertisement, used at the 1920 Motor Show, carried the headline “7½ tons at 3 ton Speed and Cost”.

The following year, a test vehicle pulled a load of just under eight tons up West Hill in Highgate, in second gear, and reached 18 mph on the flat!

Orders for 150 lorries were rapidly taken and it was clear that the Fashion Street works could not cope, so, in 1921, Scammell & Nephew floated a new company, Scammell Lorries Ltd, with Col Scammell as Managing Director. The new firm acquired land in Tolpits Lane, Watford and built a new factory for the construction of the new Articulated Six-wheeler.

This led to Scammell’s patent, in 1926, for the world’s first frameless tanker. 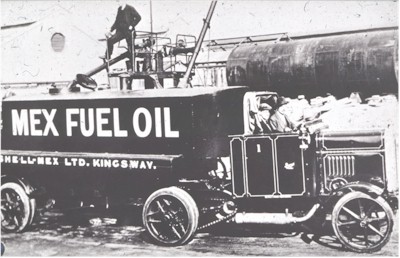 By 1927 Scammell had strengthened its position by launching its first cross-country vehicle, aptly named the Pioneer. This 6×4 rigid had a walking-beam bogie so that any of its 4 wheels could be raised two feet without the bogie losing traction. The Pioneer’s mobility could be further enhanced by adding a driven front axle. Whilst the Pioneer was popular overseas, its real success did not come until an articulated version was developed.

Two years later, in 1929, the Company introduced the world’s largest lorry, the articulated “Hundred-Tonner” heavy haulage vehicle. Only two of these revolutionary lorries, designed by Oliver North, were ever made. They were initially built with the Scammell 7 litre petrol engine, which consumed a gallon of fuel every ¾ mile! After a couple of years they were rebuilt with the then new Gardner 6LW diesel engine, and consumption improved to 4.2 mpg. With a full 100 ton payload (the heaviest load one ever carried was 165 tons) the front axle weight was 10 tons, and there was no power steering. The drive axle comprised 4 separate solid-tyred wheels in line and carried 40 tons, the remaining 80 tons being on the 8-wheel steerable carrier bogie. Even though this bogie had brakes, they were controlled by the rear steersman, who, not surprisingly, had to have a telephone connection to the driver to tell him when to apply them! Fortunately the speed when laden was no more than 3 mph.

In 1933, Scammell was able to purchase a 3-wheel tractor design from the Napier Company and promptly turned it into the famous “Mechanical Horse”. Oliver North developed a new automatic coupling, and, with the ability of the tractor and trailer to turn in less than their own length, set new standards of versatility in road transport. Over 20,000 of these 3-ton and 6-ton tractors and their successors were built, together with more than 100,000 carriers.

The Articulated Six-wheeler and its brother the Articulated Eight-wheeler were developed into the ‘Lightweight’ range with Gardner 6LW and North’s famous 6-speed gearbox.

However, the lorries built by Scammell were top-of-the-range, expensive and, at that time, built in small quantities – and money was always tight. The depression affected the firm badly and it was in a poor financial position in 1934. Watford Council had helped out by ordering a pair of fire engines, but it was not enough, and it was left to Shell-Mex to inject much-needed capital – but in return they insisted on a management shake-out which deprived Col Scammell of his post.

In 1929, the firm, looking for new markets, had diversified into four- and six- wheel rigids. The ‘Rigid Six-wheeler’ found some success and, with its balloon tyres, at last permitted sustained high-speed long-distance road operation.

The Rigid 6 was joined by a new forward-control ‘Rigid Eight-wheeler’ in 1937, the first of a long line of Scammell Eights.

The first new post-war product was the famous ‘Showtrac’. Amazingly, of the 18 built, 17 still survive and, of those, seven were seen together at Dingles in 2007.

Apart from this, the company also found itself increasingly involved in such fields as heavy construction, oil drilling, mining and logging, as well as maintaining its military presence with vehicles such as the 6×6 Explorer, 4×4 Mountaineer and, by 1952, the Constructor in its various forms.

In the mid 1950s the Super Constructor – forerunner of today’s cross-country heavies – with Rolls-Royce C6 turbocharged engine and semi-automatic gearbox was introduced.

Membership of the Leyland Group in 1955 provided ready access to Leyland engines, gearboxes and axles and was followed by the gradual replacement for the ‘Lightweight’ range by new models using Leyland engines. These were the bonneted 4×2 Highwayman motive unit, the forward control Routeman 8-wheeler and a new 4×2 forward control motive unit, the Handyman. This, and the Highwayman, could be configured as heavy haulage tractors for operation up to 50 tons or more, and were complemented by the full range of Scammell trailers made at the Moor Park works.

A new dumptruck range, comprising the 4×2 Sherpa and 6×4 Himalayan was launched.

The start of the 1960s was marked by the introduction of the new Michelotti-designed glass fibre reinforced plastic cab for the Routeman, Handyman and the new twin-steer 6×2 Trunker tractor which took advantage of the increased legal weights available when coupled to long front-overhang bogie semi-trailers.

Intended initially to compete in American-dominated territories overseas, the 6×4 Contractor high-power prime-mover with its Cummins 335 engine, Lipe clutch and Fuller gearbox went into production in 1964 and found great success as a tank transporter and heavy-haulage tractor. It had a choice of the Leyland 24 ton or Scammell 30 and 40 ton bogies which were to feature on all the future Scammell ‘heavies’. With coachbuilt cab and semi-automatic gearbox, the Contractor was popular in the UK for 240+ ton GTW operation.

Over the next few years, further designs were introduced, and in 1969 the 6×4 Crusader made its entry, initially as a high-power, high-speed motive unit with its modern steel cab. Many hundreds of a military version with the Rolls-Royce 305 engine were supplied to MoD as plant tractors and recovery vehicles. Pressure from UK hauliers, especially BRS who placed the first orders, soon resulted in development of 4×2 versions for premium operation, and so popular did these tractors with their Rolls-Royce 220 and 280 engines become that production was transferred to Guy Motors at Wolverhampton.

By this time, divisional reorganisation within the Leyland Group had resulted in the firm’s name becoming Scammell Motors, and the closure of Transport Equipment (Thornycroft) in 1972 had resulted in the transfer of their ‘Nubian’ range of 6×6 airfield crash tenders to Scammell, together with the LD55 6×4 dumptruck.
All these new vehicles were in production in parallel with the consolidated ‘A’ range comprising the Handyman 4, Trunker 3 and double-drive Routeman 3, all of which were now available with a range of engines and transmissions to compete with the powerful foreign trucks which were becoming available to British hauliers.

A surge of development in the late 1970s commenced with the Contractor Mk 2 heavy hauler with its 18 litre 425 hp Cummins KT450 engine and Allison automatic gearbox, and the build of the first Commander Tank Transporter for the British Army. This 100 ton+ GTW tractor, fitted with the Rolls Royce CV12TCE 26 litre, 48 valve dual-turbocharged 625 hp intercooled V12 diesel engine, semi-automatic gearbox and Scammell 40 ton bogie was required to have the same acceleration and braking performance as a contemporary 32 tonner! New braking, cab, bonnet and winching systems were devised, and the fleet entered service in 1983, having been built at the newly-opened moving line construction shop which at last gave Scammell a modern state-of-the-art factory.

In parallel with this development the ex-Thornycroft Nubian range was replaced by a completely new range of 4×4 and 6×6 rear-engine airfield crash tenders with engine powers up to 540 hp. To complement their automatic transmission, Scammell devised a family of high-power PTO systems to enable the foam discharge system to be operated at constant speed whilst also driving the vehicle.

The last new version of the Contractor was built in large quantities, including a 6×6 for heavy recovery in the Middle East.

Two developments by the parent company, Leyland Motors, at the end of the 1970s benefited Scammell. Leyland wished to develop two new heavy vehicle ranges, the overseas bonneted Landtrain and the UK forward control Roadtrain which would feature the new C40 tilt cab. In view of Scammell’s expertise the firm was tasked with development of the Landtrain and was able to use the same cab and bonnet for the replacement for the Contractor. This range, the S24, was available in 6×4 and 6×6 formats, with manual, automatic or torque converter/manual transmissions and a newly-developed transfer gearbox for 6×6 versions. The full weight range from 40 tonnes GVW to more than 200 tonnes GTW was covered, with the Cummins NT 350 or 400 engine, but the difficulty of providing a replacement for the Contractor’s coachbuilt cab was dealt with by specifying an American-type crew ‘pod’ behind the cab. To replace the Super Constructor oilfield flatbed vehicle a long-wheelbase S24 6×6 with the Constructor winch and body was produced.

Knowing Scammell’s pre-eminence in the field, Leyland entrusted the eight-wheeler version of the Roadtrain – called the ‘Constructor 8’ – to Scammell. This would at last give Scammell access to a modern tilt cab. To supplement the lower-powered Leyland Roadtrains, Scammell developed the S26 range using the same cab and eventually, as the 1980s progressed, a range of premium 4×2, 6×2 and 6×4 tractors with a full range of engine and transmission options was developed to replace the Crusader and ‘A’ range, with as much similarity with the S24 running gear as possible.

A military 6×6 version with Rolls-Royce 350 engine, ZF automatic gearbox and Kirkstall axles followed, and this was offered, in 8×6 form, to the British Army in 1986 for the hooklift-equipped DROPS vehicle requirement.

In February 1987 Scammell learned that its tender for 1522 such vehicles was successful – but also that the Leyland group had been purchased by DAF BV of Holland. DAF elected to build the DROPS and selected S26 vehicles at the Leyland plant, and to close the Watford factory.

Upon closure in July 1988 the S24 and the Nubian ranges, together with rights to the Crusader and Commander, were bought by Unipower Ltd who opened a new plant in West Watford.